Description
Box Girder Bridge is a bridge where the key beams consist of girders shaped like a hollow box. Box girders comprise structural steel, pre-stressed concrete, reinforced concrete or composite of steel. Such girders are used for footbridges, railway bridges and highway bridges. Box girders are mostly used for long span bridges where the actual self weight of the bridges has to keep minimum. They are also used for situations that require high torsional stiffness of box girders.

Steel box girder bridges are commonly used for highway flyovers and for modern elevated structures of light rail transport. Although normally the steel box girder bridge is a form of beam bridge, box girders may also be used on cable-stayed bridges and other forms.
Facts about box girders
A box girder comprises two concrete slabs — top and bottom. The slabs are connected by an array of vertical bridge stems, also known as webs. These webs can be vertical or inclined, as per your requirement.
Box girders are formed by joining two web plates by a common flange at both the ends. And this makes a closed cell that has enough strength and torsional stiffness than that of an open section. And this is the reason for choosing box girders.
Box girders are not generally used for construction of buildings. However, they might be required in certain circumstances like when the loads are carried eccentrically to beam axis.
Application
Generally used for urban bridges or highway viaducts and overpasses with small spans
Reinforced concrete: medium and small span
Prestressed reinforced concrete: large span
Straight leg frame (door type) and slant leg frame: medium and small span
T-shaped rigid frame, continuous rigid frame: large span· Road Bridges· Pedestrian Bridges· Railway Bridges· Steel Truss Bridge· Beam Bridges· Steel Bailey bridge· Structural Steel Box Bridge· Highway Bridges· Composite Beam Bridge· Cable-Stayed Bridge· Floating Bridge etc.
Advantages of box girders
Reduce the requirement for support points
Have high strength and torsional stiffness that give greater and better suitability for horizontally curved bridges
Ensure enhanced durability
Require minimum maintenance of simple protective coatings as these have less exposed surface and only a few edges
Our experienced team is focused on your steel bridge project's success, from start to finish. Our proven ability to identify and overcome design inconsistencies, potential problems with erection, and shipping obstacles results in the fabrication of structural steel that is right the first time, helping you avoid costly construction delays.

Finally
The success of the Bailey bridge was due to the simplicity of the fabrication and assembly of its modular components, combined with the ability to erect and deploy sections with a minimum of assistance from heavy equipment. Many previous designs for military bridges required cranes to lift the pre-assembled bridge and lower it into place. The Bailey parts were made of standard steel alloys, and were simple enough that parts made at a number of different factories could be completely interchangeable. Each individual part could be carried by a small number of men, enabling army engineers to move more easily and more quickly than before, in preparing the way for troops and materiel advancing behind them. Finally, the modular design allowed engineers to build each bridge to be as long and as strong as needed, doubling or tripling up on the supportive side panels, or on the roadbed sections. 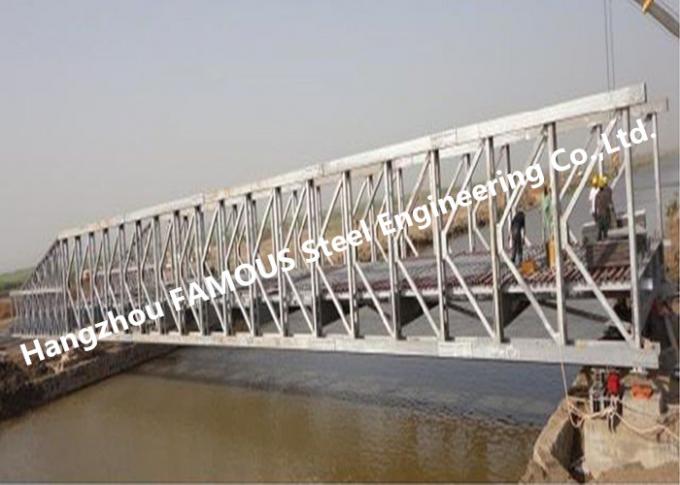